But is it always a good model to use in your software business–if you are actually interested in making money? 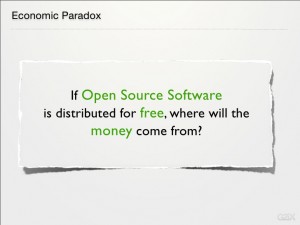 I will admit that my feelings toward open source business models have always been lukewarm at best. Maybe there’s a bit of dinosaur in me.

But in my opinion the idea of putting into the public domain the code that you’ve sweated to produce, at great emotional and financial expense definitely rubs me the wrong way. It strikes me as fundamentally opposed to the basic nature of capitalism and entrepreneurship.

Like just about everything else in business, however–the devil’s in the details. Using Open Source methods has been shown many times over to be an effective competitive weapon in the software business–when used thoughtfully and strategically.

Poor Use of Open Source Software

Let’s first examine a typical example of what I consider a misuse of the Open Source model. It often goes like this: Technical founder with a crack programming team and little marketing money or expertise, decides that they are going to use Open Source to inexpensively roll out their new product in the market. Being programmers –and maybe idealists as well– they love the idea of Open Source from a user perspective, and so they have a strong belief that the market they are aiming at will love it as well. Unfortunately, they aren’t trained as marketers and don’t think the situation completely through.

Here are some of the negative things that can happen:

1) Since the company is releasing the initial product as Open Source, they don’t feel they need to be quite as diligent as possible with QA of the code as well as other “commercial product” polishing activities. Basically the product is rushed to market–the open source community will do the polishing, the thinking goes. Maybe. But this raises the chances that the product isn’t well-received initially, costing them the one opportunity that you have to make a good first impression

2) Open Source tactics are used prior to developing a proven business model: “We’ll release a free Open Source product and have so many users we can figure out how to make money later”. This is reminiscent of the old “eyeballs” business plans prevalent just before the Internet bubble burst in 2001. It still can work in rare circumstances, but is really just a shot in the dark. It’s very important to have a solid idea of what the Open Source release is going to gain you and what the subsequent steps are that will to allow you to capitalize on the wide attention. Ultimately, you need to monetize SOMETHING. There are ways to make money with an Open Source model: customization, training, support, consulting, premium versions–but in many instances these won’t really support a serious, mainstream core software development effort if you are also interested in real profits.

3) The company has done some thinking about the business model issue, and has decided that there will be a free Open Source version released initially to seed the market. The follow-on product will be a premium paid version (SaaS or on-premise) including added features with the hope that the large user base from the free version will upgrade to the more attractive premium version. But without expert marketing analysis, balancing how much to “give away” in the free community version and how much to “hold back” for the premium version can be quite tricky. If you don’t get the balance just right, the potential revenue stream can be greatly reduced. And there is also the danger that the Open Source version could also become competitive with the premium version via upgrades from the Open Source community.

4) The company is in a conservative market segment that highly values order and traditional business practices. In this circumstance using an Open Source model could seriously devalue your product in the eyes of your conservative target prospects.

Good Use of an Open Source Business Model


The other side of this story is that when utilized thoughtfully, Open Source can be a major strategic weapon in certain markets. Let’s look at some scenarios of how an Open Source strategy might be implemented more shrewdly:

A) When entering a new market against a huge, strongly entrenched (but slow and stodgy) competitor, where it will be difficult to get traction with traditional business models and marketing methods. This is Open Source software used as a Guerrilla tactic.

B) In markets where the availability of Source Code REALLY IS IMPORTANT. This may be the case for reasons of integration, or for reasons of business continuity where they would absolutely require source escrow anyway.

C) Having a free Open Source version for one type of small volume customer (internal developments), but to redistribute the code for commercial purposes, there is a royalty/fee. This is using the Open Source model only partially. MySQL used this model very successfully for quite a while.

D) Formulating a well thought out, hybrid business model ahead of time. For example, a free Open Source version is made available to seed the market. Backed by extensive research and marketing planning, a paid premium version is made available with just the right additional features at just the right price, creating huge upgrade numbers with minimal marketing expense.

E) An Open Source software product is created for a particular market segment driven by data backed by research that this segment will require and pay for substantial levels of integration, customization and/or support.

G) A company is created to service an EXISTING Open Source software project that has some “holes” in it which is preventing optimal commercial acceptance. Examples are Red Hat and other distributors of Linux, as well as a number of companies created to provide commercial-grade support, distribution and product extensions/SaaS versions/premium versions around various other Open Source software projects (notably databases).

That’s my view of the potentially good and bad approaches using Open Source software as part of a commercial business model. Used well, it can be a major weapon–when the situation calls for it. But if used blindly by companies just following a trend or in desperation–it can become the “Business Model of No Return”.