A lot of people think the secret to good tech company leadership is being smart and decisive. Or maybe they believe the most important aspect is being able to inspire the troops, or provide the proper resources for the company to be successful. All of that is important, of course. But I think that there are other important aspects of great leadership in a software or hardware company that are more nuanced and are often overlooked. Let’s take a look at some of those frequently overlooked but important points of successful leadership:

While this statement about following skills probably should be obvious, I don’t believe it is to many in leadership positions, especially those who may be new to an increased level of responsibility. There is the old saying that “everyone has a boss” which is true in 99% of the time. Even a CEO has a board of directors and in most cases outside investors to answer to. For the rare tycoon that may not have to answer to many people directly, they still likely have bankers, suppliers and customers that hold a great deal of influence over their ultimate success or failure. I believe that leaders who truly lack the ability to follow when needed are set up for a fall.

The word “leader” itself implies initiating actions that impact those below and many in leadership roles interpret this as “telling those below you what to do”. Of course, that is a pretty dated view of the art of leadership. However, I find it still is probably the most common way leadership is practiced, even in what should be the “enlightened” environment of the modern technology company. 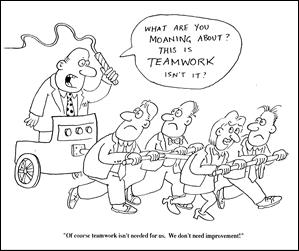 Much more important attributes of successful tech company leadership focus on “leading by example”. Employees tend to be much more strongly influenced – especially in the long run – by positive, concrete examples of desired behaviors than they are by simply being instructed to engage in those same behaviors. In other words, if you don’t follow your own advice, your directives are likely to fall on deaf ears.

I really believe that one of the most critical of these “leadership by example behaviors” is the ability to be a good follower yourself. After all, good following is something critical to most manager’s success: having a staff that they can trust will implement decisions after they become final. But I find that many in tech company leadership positions either haven’t adequately picked up on what it takes to be a good follower, or become so punch-drunk with power that they just can’t bring themselves to practice the art of “good following”.

The second point I’d like to address in this discussion of under-appreciated leadership attributes is how effective a manager is at making their own team successful. There are several key aspects to this:

I find that these steps in themselves (regardless of any other executive attributes you may or may not possess) -when well executed – can position a manager as a strong leader within an organization and set them up for great long run success. Because if the team is successful and they believe their manager stands behind them, it’s almost impossible for their rising tide not to lift the manager’s boat. Sadly, I run across far too few managers that understand this concept.


I’ve written about the early years of my career at HP often in my articles. HP culture really allowed many people to accept leadership roles and “make their own mistakes” rather than simply respond to top-down management. But early in my career at HP I was a bit of a “pain in the rear” when dealing with my supervisors. It was my first job in a technology company, I was still pretty young and looking back, I thought I knew everything. It wasn’t until I had my first real management job a couple of companies and a few years later that I realized HOW MUCH of a pain in the rear I really had been. I had to learn the hard way the value to a manager of a good follower. It was a painful lesson and probably karmic payback, when some members of my team couldn’t bring themselves to effectively implement a decision that differed from their preferred approach — even when they had been given every opportunity to participate and influence the decision-making.

In addition to learning to be a good follower, offering SOLUTIONS and not just pointing out PROBLEMS to your boss is also critical to successfully managing upward. Good managers don’t just want a bunch of lemmings who follow their lead, but folks who can assist them in solving those problems by proposing good solutions. Effectively managing upward ties together these two concepts of 1) knowing when to follow but also 2) adding value by offering solutions. But the really key point to remember is that when the decision is finally made, it’s extremely valuable to your manager to implement that decision like you were the one who came up with it, even if you disagreed with the approach.

Looking back on my HP days, to this day I still feel like a majority of my ideas and opinions at the time were “spot on”. (maybe ego really just dies hard!). But that really didn’t matter anyway, in hindsight. What’s in practice much more important is helping your manager get the outcome that has the best chance of success — not being personally right! Sometimes that includes having the best idea, but more often than not it’s helping implement some other idea to the best of your ability. This is hard for many people to accept and requires a great deal of maturity. In addition to the critical activities of proper following and offering solutions, there are a few subtleties that that will help grease the skids for an effective relationship with your own boss:

The ability to manage up effectively is very important to effective tech company leadership. Ironically, this ability to manage up successfully is critical to being a great boss for your own employees. If you are effective in helping those above you achieve their goals, it’s very likely that resources, rewards and promotions are on their way to both you and your team.

To summarize, no organization can succeed by striving to just hire and grow leaders – or followers either. A mix of both skills is required to conduct business and ideally both skill sets are found in most of your employees, especially the key management of the company. You can’t just hire all “alpha dog” style leaders or you have anarchy; if you hire all passive followers, decisions tend to be made far too high in the organization and progress often grinds to a halt. Successfully leading and following in a tech company are both more subtle and nuanced than the average manager realizes.

Those are my rather esoteric thoughts on software or hardware tech company leadership. How well do they match up with your views? Post a comment below to share your own attitudes and experiences on this topic.